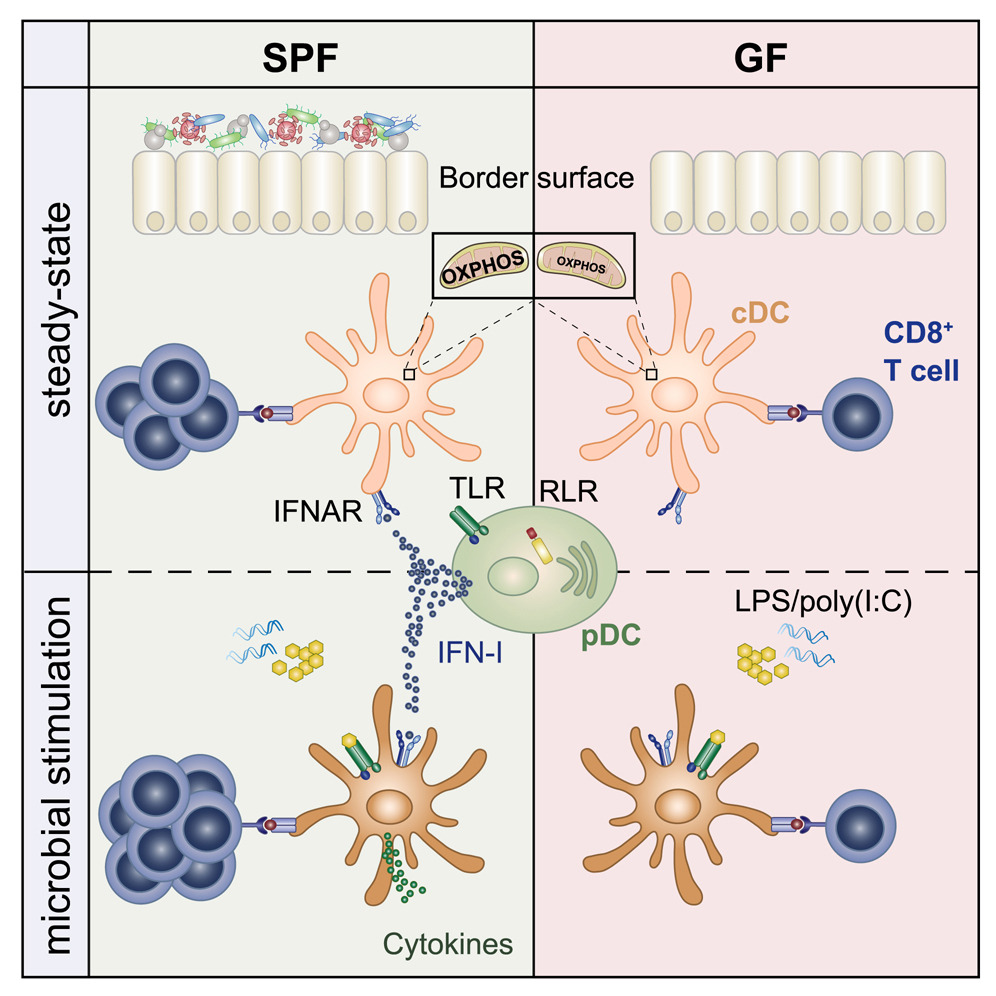 The microbiome regulates the fitness of the immune system

Working alongside colleagues in Mainz, Bern, Hannover and Bonn, researchers from Charité – Universitätsmedizin Berlin, the Berlin Institute of Health (BIH) and the German Rheumatism Research Center Berlin (DRFZ) were able to show how the microbiome helps to render the immune system capable of responding to pathogens. If absent, relevant mediators are not released, resulting in a failure to activate metabolic processes in certain immune cells. According to the researchers’ report, which has been published in Cell*, this leaves the relevant cells without the necessary fuel to mount an immune response.

Residing in environmental interfaces, the body’s epithelial tissues represent potential gateways for pathogens. These tissues are also naturally colonized by a complex community of bacteria, viruses, fungi and parasites, and this is known as the microbiome. It is likely that, during the course of evolution, permanent interactions with these microorganisms resulted in the development of robust signaling pathways which help to protect the body.  A team of researchers led by Prof. Dr. Andreas Diefenbach, Director of Charité’s Institute of Microbiology, Infectious Diseases and Immunology, have been studying the microbiome’s role in the body’s immune response against harmful pathogens and the resulting effects on signaling pathways.

Presence of an infection triggers the body’s immune response. A key role in this process is played by ‘conventional dendritic cells’ (cDCs). These form part of the body’s innate immune system and carry a range of pattern recognition receptors, which enable them to quickly detect invading pathogens. The cells’ initial response involves the release of cytokines, signaling proteins which attract immune cells to the site of infection. At the same time, these cells also use phagocytosis to engulf and digest invasive pathogens, after which they present individual particles as antigens on their cell surface.This, in turn, leads to the activation of T cells (which form part of the adaptive immune system) and results in a targeted immune response. In contrast, when T cell activation is triggered by cDCs presenting endogenous antigens, this leads to a faulty and undesirable immune response and results in autoimmune diseases.

The team of researchers led by Prof. Diefenbach found that cDCs are incapable of triggering immune responses in sterile conditions (i.e., in germ-free mice). The researchers concluded that cDCs must receive information while the cell is in its ‘basal state’ (which is characterized by the absence of infection) and that this information must derive from the microbiome. These microbiome-derived signals prime cDCs for a future response against pathogens. “We want to understand the nature of the microbiome’s continuous effects on cDC function,” says Prof. Diefenbach, who also holds an Einstein Professorship in Microbiology and leads the DRFZ’s Mucosal Immunology Research Group. “In this study, we were able to show that, in their basal state, these specialist immune cells are subject to the uninterrupted microbiome-controlled signaling of type I interferons (IFN-I).” Interferons are cytokines, i.e. special signaling molecules which are known to play a role in antiviral activity. “Until now, we had known only little about the role of IFN-I in the basal state. cDCs, which do not receive this IFN-I signaling during the basal state, cannot fulfill the physiological functions which they perform as part of the body’s fight against pathogens,” explains the microbiologist. Study results suggest that the microbiome controls our immune system’s fitness. It exerts this control by bringing the immune system to a state of ‘readiness’ in order to speed up its response to pathogens.

The researchers used various animal models in order to gain insight into the manner in which the microbiome-controlled IFN-I primes basal-state cDCs for future combat. Using sequencing technology, the researchers were able to compare the epigenomes and transcriptomes of cDCs from germ-free animals with those of control animals and animals deficient in IFN-I receptors. The researchers wanted to know what happens at the molecular level in cDCs when they are no longer exposed to IFN-I. Describing the researchers’ observations, the study’s first author, Laura Schaupp, says: “Interestingly, when we looked at cDCs from germ-free animals and those without IFN-I signaling, we were able to observe low levels of expression among genes involved in the mitochondrial respiratory chain.” The Charité researcher adds: “Further analyses revealed that the cellular metabolism of cDCs from germ-free animals is dysfunctional, making them unable to initiate an immune response. The cells effectively lack the fuel needed to respond to pathogens.” This suggests that the microbiome is of crucial importance to the functioning of cDCs. It appears essential to the ability of cDCs to mount an effective response to bacterial or viral infections, including responses mediated by T cells.

The researchers’ findings may contribute to the development of new therapeutic approaches. Many autoimmune diseases, such as systemic lupus erythematosus, are caused by an increased production of IFN-I. Other studies have shown that the microbiome influences the effectiveness of checkpoint inhibitors in cancer immunotherapies. “These phenomena will continue to be of great interest to us,” says Prof. Diefenbach. “For instance, is it possible to change the composition of the microbiome in such a way as to reduce the availability of IFN-I, thereby exerting a positive influence on autoimmune diseases? Or might it be possible to improve responses to cancer immunotherapies by exerting a positive influence on the underlying IFN-I production?” The team of researchers now plan to conduct further studies which will explore these questions.